Hundreds of years after the collapse of civilization, you are the Professor, an archaeologist searching for the sunken city of Houston. Helping you are the Commander, an explorer from another colony, and ARORA, an artificial intelligence built to help the survivors of the Collapse.

RIVE is not my jam. 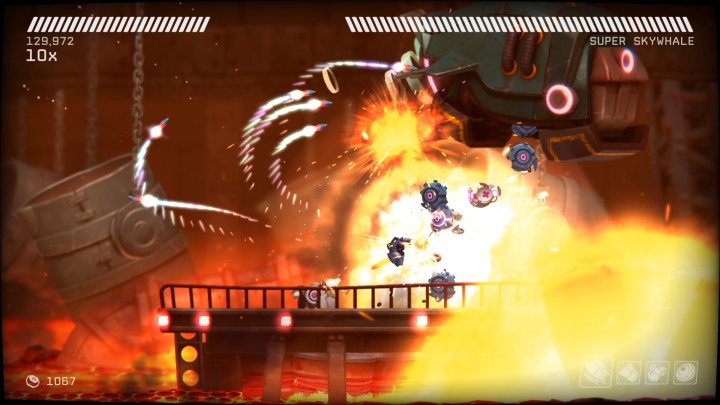 RIVE is an explosive twin-stick shooter that wants to beat you up and steal your lunch. Sending you home with a black eye while shouting at you to come back for more. Punishment is the name of the game. Can’t keep up with the onslaught of laser death-dealing robots? No problem. RIVE‘s failure screens will remind you of how bad your reflexes have become. You’re an old man, gramps! Too cool for this school.

Beyond the difficulty, I love how RIVE‘s checkpoint system shows the player mercy. The more you die, the closer the checkpoints become. Encouraging players to keep fighting, no matter how hard they have been smacked down.

What I’m not quite sure about is the placement of the jump button. On the PlayStation 4, the jump button is assigned to the L2 trigger versus the standard X button. The end result is curious and awkward feeling.

RIVE reminds me of the worst games I played during the Console Wars of the ’90s. Difficult. Demanding. No satisfying reward.

In the end, RIVE fails to bring anything new to the playground. Not even revealing one compelling example to keep pressing onward. The game revels in bashing the player over the head with difficulty for the sake of difficulty. I have no time for that. RIVE is not my jam.

[Disclaimer: This review is based on a retail build provided by Evolve PR.]

Okhlos looks like a fantastic mixture of Pikmin, The Wonderful 101, and Rampage. The game is supposed to be launching sometime this spring on PC, Mac, and Linux.

Crossing my fingers for a future PS4 or tablet release.

Tabitha and I experienced That Dragon Cancer together. With Wyatt tucked away in bed for the night, we hooked the laptop up to the television. Light’s dimmed, we entered the world of the Green family. The musical score comforts like a warm blanket. The woods around full of promise and wonder. In this setting we meet the Green’s son, Joel, who is feeding a duck. Joel laughs, a lot. After a transitional time at the playground, we meet the dragon of this story, cancer.

Cancer, represented in jagged distorted shapes of hate. Always lurking like a monster in the night. Howls reverberating as a heartbeat of a sick boy.

That Dragon Cancer is a series of vignettes, brief flashes of hope and dark nightmares. Narrated at times by Ryan and Amy Green, we follow their family on their journey with Joel. Tabitha and I appreciated the depth of honesty in Amy’s comments on doubt. Doubt is normal, she says. A contrast to the modern Church whispering “hush” in such moments. 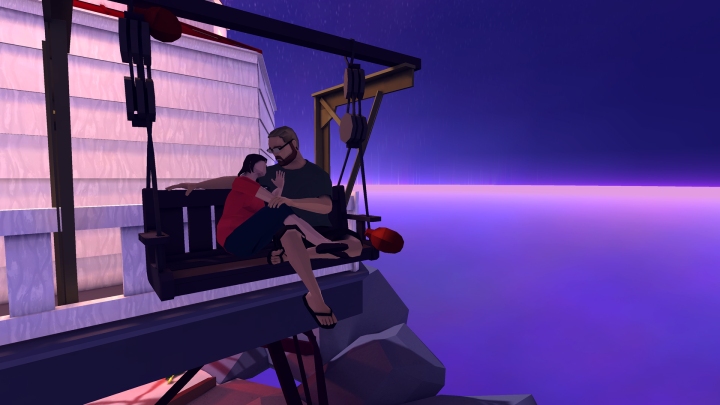 No matter how dire the situation became. No matter how hard Amy and Ryan prayed, their faith stood out to us. A faith that allows for questions, doubts, and even fears. Media, as a whole, has a hard time portraying faith. The video game medium allows for an unknown level of intimacy. Allowing us to partake, in some small way, in the Green’s suffering. I’m thankful for that.

As the game ended, I found myself in a contemplative mood. That Dragon Cancer reminded me of my need to pray. I prayed for Amy, Ryan, and their family. I fell asleep only to wake up sometime later. Praying over life, direction, and meaning.

I would like to thank Ryan and Amy for being real. For sharing Joel’s life and opening up their family to the world.

*A review copy was provided for this review.