I don’t know about you, but I have been all over the place with video games as of late. Bouncing between:

I’ll race through a cup in Mario Kart 8 Deluxe and then play a level or two in Mario + Rabbids Kingdom Battle. Following that up with a couple hours of Star Wars Jedi: Fallen Order and then a level of SteamWorld Heist. I feel like a kid at a buffet who keeps dashing between food items… and deep down I know that I just want to get a single plate of corn fritters (deep-fried cream-corn goodness).

Star Wars Jedi: Fallen Order, Wolfenstein II – The New Colossus, and Horizon Zero Dawn all equal games that require time to get into the games head-space; time to feel out the game’s rhythms and core gameplay loop. I have found myself attracted lately to games that can be played in quick bursts. Racing a cup (4 races) in Mario Kart 8 Deluxe takes 10-15 minutes, count me in! Destroying Wyatt in Super Smash Bros. Ultimate (more likely the other way around), I’m there!

Gets me thinking about the larger list of games I have laying around, waiting to be continued. Games such as:

So many games… so many worlds… so many play styles… so many experiences waiting to be had. But, right now, I keep gravitating towards the games that allow me the maximum amount of gameplay for my time. I’m not looking for deep video game experiences. But I would love to settle down with a plate of corn fritters soon.. and maybe Ni No Kuni II… and Destiny 2: Forsaken… does it end?

How about you, do you ever feel like you are bouncing from one game experience to the next?

Sunday morning, I announced to my Sunday school class that I felt a man cold coming on. I asked for everyone to sign up to bring meals for me. Tabitha wasn’t in the room at the time (she was checking kids in), so I also made them promise not to say anything to her. Sadly, no one took me up on my dire request for sustenance.

By Sunday evening, I was running a fever. Ended up taking Monday off as a sick day. I slept a chunk of the day.

Yesterday, I visited a clinic. Found out that I have both a sore throat (which I didn’t know) and a sinus infection. So now I’m on antibiotics and out of it at work. Seriously, I just went to CVS to pick up a birthday card for a co-worker. When I got back to work, I wondered how I ever drove to CVS (felt that out of it). 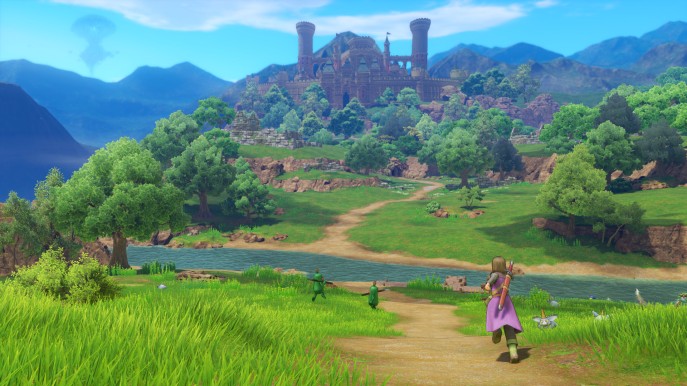 Sat down last night and had a chance to play some more of Dragon Quest XI. I wasn’t so sure about my decision to pick up the game last weekend. The GameStop employee wouldn’t stop gushing over the new Spider-Man game. Even going as far as to say it made him cry at least 3 times, and he doesn’t normally cry. I told him I was going to Redbox Spider-Man and instead introduce my son to a non-Final Fantasy JRPG.

There is a cadence to Dragon Quest XI. A rhythm to the overall pacing and storyline. I wasn’t sure, at first, if I liked how slow the game felt. But the more time I have put into Dragon Quest XI (sitting at about 3 1/2 hours so far), the more I’ve come to appreciate what the game is. 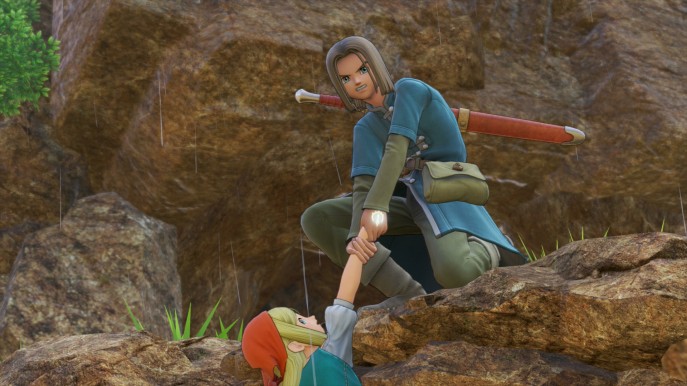 Be a man…. We must be swift as the coursing river.

Last night, I was making my way through a wooded area when I came across a dog. The dog woofed at me and then I kept going until I came to a bridge that was destroyed. Needing to find a way forward, I backtracked to where the dog was and noticed that he wanted me to follow him. So I followed the dog up a path. It was then that I found some sort of shimmering ball that I touched. Suddenly, I saw a memory of a woodcutter upset that the bridge he had built had been destroyed. Turns out a monster had destroyed the bridge and had then turned the woodcutter into a dog. Things are not always as they seem, right? I then pursued the monster, battled him, and returned the woodcutter back to his human form. He then rebuilt the bridge, and I was on my way. 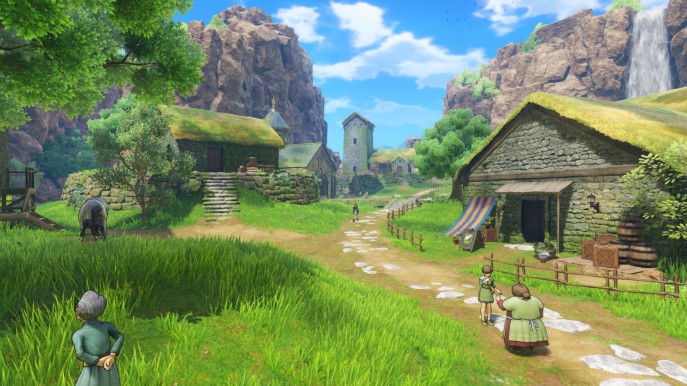 Dragon Quest XI, so far, has told stories that are not original but that are executed in clever ways. The woodcutter/dog story caught me by surprise. It was a small quest story that showed a lot of thought, especially for what is supposed to be an 80 hour game.

At 3 and 1/2 hours, I have picked up one party member so far (Erick). I’m looking forward to the adventure that is it come and to enjoying the journey along the way.