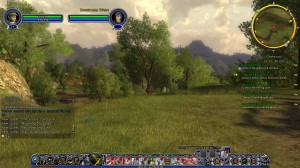 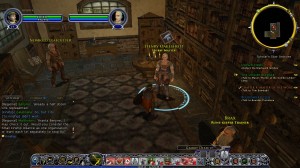 Went to visit the Hobby Master in Bree this evening. He would stare right at me and yet say nothing.  So, I offered him a few of my mother’s choice pies — so delicious! –. Nothing. He just stood there, looking at me. Humans, at times, are odd. – Aubrik 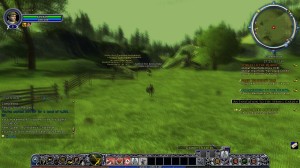 They say not to drink and drive...what about drinking and walking atop fences?

10 years ago, I stepped through the portal into the lands of Dereth. As a beta tester, I remember spending hours chatting with friends, watching sunsets/ the virtual sky, and adventuring forth into the unknown.  Asheron’s Call (AC) marked my first introduction to the world of the MMO.

In the years following AC’s launch, much has changed in the virtual landscape. EverQuest is no longer the reigning MMO champion, the Warcraft universe has expanded into World of Warcraft, and the sequel to Asheron’s Call, dubbed Asheron’s Call II, has come and gone.

With all the changes in the MMO landscape, Asheron’s Call is still the only game—to my knowledge—that features an allegiance system. This system introduces the unique concept of vassals and patrons. In this system, a vassal swears allegiance to a patron. The patron then acts as a protector, item giver, and basically a guild leader. The reward for being a patron equals a daily award of experience points based upon a small percentage of experience that the vassal makes while playing. The allegiance system ultimately encourages the formation of miniature kingdoms, much like guilds found in today’s more modern MMO.

Unlike a fine wine, MMO’s do not age well with time. MMO’s are all about refinement. Each new MMO takes (hopefully) the best ideas from what has come before and melds them together with new ideas. Sometimes this creative process works on an epic scale (World of Warcraft) and other times fails tragically (Star Wars Galaxies). In the end, I think we can all thank Asheron’s Call and developer Turbine for helping to blaze the trail to bigger, better, and more forgiving online experiences.

May ye die eventually and honorably.