Last year, when Tabitha and I were going through adoption certification/PRIDE classes, I shared with a coworker the journey we had begun. Somewhere in that very honest conversation, she said to me, “I just don’t understand white people adopting black children, acting like white saviors.” While our conversation ended well, I was quite taken aback and felt hurt. Tab and I had started our adoption journey because we felt God calling us to do so. We felt Him telling us to proceed. We’ve both said that we can provide a stable home for someone who has not been given that stability. Never in my mind did I ever see myself nor my wife as some sort of white saviors. Apparently though, those thoughts exist in others. I had known that the adoption process was about developing thicker skin, but I had not known just how thick it was going to have to become.

In our adoption classes, we would hear about how we would need to expose our potential black adopted children to black culture. At the same time, we were never told what black culture is.

From white friends, I’d hear, “Well, if you adopt a black child, you are going to need to expose them to people like their own, black culture.”

I would reply, “What is black culture? How does that differ from white culture? Do you even know what you are saying/talking about?”

I can’t wrap my mind around this situation. The blatant injustice on public display. How a moment in time could be escalated to the point where someone dies intentionally at the hands of those who are supposed to uphold justice.

I want justice for George Floyd.

In the same breath, I wonder about bringing a black child into my home. Raising this child in a white family. Worrying about the possibility of them being killed, by a police officer, due to the tone of their skin.

As a white male, I don’t think too much about being killed by a police officer during a traffic stop. Last year though, I was pulled over for making a right hand turn into an outer lane versus the lane closest to the curb. I watched as the police officer drove past me and then made a quick u-turn to come after me. I couldn’t figure out what I had done. Daily, I watch other drivers make the same type of turn I had just made. After thinking about it, I think I wasn’t pulled over for turning wrong. No, I think I was targeted due to the condition of my car and the perceived nature of my skin.

Note: My Honda has black paint that has been peeling for ages. The car is nice on the inside but looks rundown from the outside. I call it camouflage!

As the young officer walked up to my car, I noticed a change come over his demeanor. I could tell that he thought I was going to be either black or Hispanic, but not white. As he told me why I was pulled over–which to me seemed like he was reaching for a technicality–he told me he was going to let me off with a warning.

Now, every time I pull up to that traffic light where I was pulled over, I make sure to practice the correct type of lane change. I also get a little angry, remembering that day, remembering feeling targeted because of the condition of my car. If that incident was but a small taste of what black people deal with, in America, on a daily basis, I cannot even imagine living like that.

I know that we live in a fallen world. That Jesus is coming back. But I hate the injustice that I see around me. I hate the helpless feelings that I can’t do anything to bring about change. I hate having to think that someone that we bring into our home, no matter our parenting nor love, could still be the target of such heinous acts.

I figure that if my family can be a model of God’s love to just one child, perhaps he or she can make an impression and help change the world for the better until His return. And while we are waiting for that child, black or white, I have my own son to teach.

Adoption is messy. Conversations about race are messy. But we need to listen, talk, and act towards a brighter future.

I had one of those difficult conversations last night with a foster mother. She talked about a recent placement her and her husband had received. As she unpacked a story that included:

I was reminded that these children need an advocate–and not just the children she was talking about, all children in the foster care system–. Someone to fight for them, to push back against doctors / teachers / life; Someone to provide a place of stability after living in what I’d call a war torn home. There comes a point, when you are listening to such a story, where feelings of empathy and ultimately justice kick in. You can’t help but feel for these children; children who have done nothing to deserve the adult situations they have been plopped into. Makes me thankful for those who have been called to foster and who provide a sense of normalcy and stability while birth parents have a chance to figure things out / get their lives together.

As the foster mom talked, I could feel a small thread of fear trying to grip me. An inner voice saying, “This is the type of horror story you’ve heard about. This could happen to you and Tabitha! You could be placed with a child that has been misrepresented to you AND has all sorts of problems.” As I pushed back on that fear, the foster mom kept saying, “God has called us to this, and He will see us through it.” Amen.

I love how God used this conversation to strengthen my resolve. Reminding me that children are out there, hurting, needing a place of stability. I stand firm, in God-given peace, that He has called us to adoption.

This is not to say that I am not still wondering about timing. I am not good at waiting. God first spoke to Tabitha and I in January of last year (2019). Calling us to move past our 10+ year grief of infertility; calling us to adopt.

Adoption is a process. The Hall Family is still in that process. At the beginning of December, we met with our Adoption Development Worker. She said that she had not found any children that were a good fit for our home. So we wait knowing that our God is big, His timing is good, and that He loves us.

You ever play something that just hits you wrong?

My wife and I are in the process of adoption. Don’t Nod Entertainment’s The Awesome Adventures of Captain Spirit reminded me of our foster/adoption training classes. A chunk of the stuff that parents get their kids taken away for = present in this game. As is:

The superhero story veneer and child-lens softens the blow of what is a super depressing and potentially abusive situation. I’m thankful the game didn’t last long. Sad that kids have to deal with stuff like this when all they crave is stability and love.

Never know what is going on inside a home. 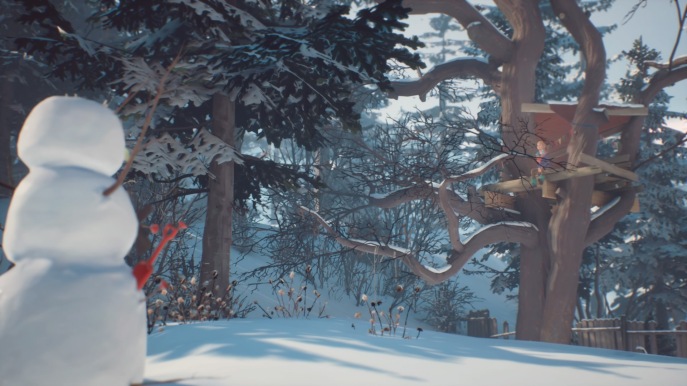 Outside of his drinking, the dad in this story clearly cares. Check out the treehouse!

Never quite figured out what happened to the mom.

As I announced last week (“Whichever Shoe Fits“), Tabitha and I are looking to adopt through the Texas Department of Family and Protective Services. Adopting through the State means that we step in after parental rights have been terminated. Whatever family that existed before has been legally dissolved due to failure of court appointed plans being followed or individual situations calling for removal. The goal of Child Protective Services (CPS) is family reunification. This means that CPS and the State give parents every opportunity to be reunified with their children. Tabitha and I are stepping in because reunification has failed and these children now need a home.

Can you imagine the family you grew up in no longer existing? I can’t. Tabitha and I both come from stable homes. Homes where we were provided with food, clothing, and a loving environment to grow up in. The thought of being taken away from my parents, at any age, and put into foster care is the stuff of nightmares. As adoptive parents, we are stepping into a world of:

From the beginning, I have told Tabitha that if anything, we can provide stability. A stable home where we can work through the roots of a family dissolved and grow into something new.

I wonder why I have days where I question why I feel overwhelmed by the adoption path we are on. And then I write something like this and am reminded of the brokenness these children have experienced. If you were to ask me: Are you excited over adoption? I’d tell you yes. But I temper my excitement knowing that a family has to go supernova before they can be welcomed into mine.