Kotaku reported earlier today that the 2011 Pokémon Video Game Championship is but a month away.

For those in the United States, prepare your Pokémon to battle on:

For those over the pond:

Those that prove that they’ve got what it takes will continue on to the  2011 Pokémon World Championships (August 12-14th) hosted at the Hilton San Diego Bayfront in San Diego, California.

I may or may not be getting Pokémon Black for Easter. 🙂 Wonder if I have enough time to catch and train a group worthy of defeating the very best… 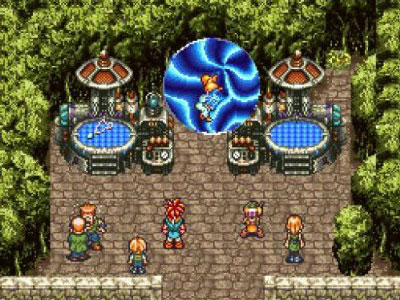 Chrono Trigger is a game that has become something of an enigma to me. Over the years, I have unsuccessfully attempted to dive into this masterpiece. Each attempt has been oddly foiled as you will soon see.

Back in the days when Chrono Trigger was hard to obtain, which wasn’t long ago, I entered the shady world of emulation to get my fix—I did this back in high school…a decade ago.—. Serving me right, for not spending $100 on a physical SNES Chrono Trigger cartridge, I played the game up until the world of the grim future. It was then that I quickly discovered that the emulator I was using was busted! No matter how hard I tried to adjust the emulator settings, the world of the future was blurred by an unintentional fog. I was blind. With no way to go forward, my game was tragically over.

I only wish the emulator had displayed things as clear as the image above.

Fast forward through the Y2k “crisis”, well into the year of 2008, when Nintendo released Chrono Trigger on the Nintendo DS. My second attempt at completing the game was soon to begin. Armed with a charged DS, I spent Christmas of 2008 immersed in the world of Crono, Marle, and Frog. Unlike my earlier foggy attempt at completing the world of the future, I actually got passed it this time. Only to have the DS controls freak out on me unexpectedly. I still do not know what happened but suddenly I had no control over Crono (who was my lead party character). At a total loss and getting my butt beat over and over in battles, I decided enough was enough. So I put the tiny cartridge back in its case and closed it for two solid years.

Recently, I decided that there had to have been a setting changed or something. Suddenly loosing control of my main party member made absolutely no sense to me. Newly empowered, I restarted my earlier game only to be greeted by the game’s amazing soundtrack and setting.

Chrono Trigger represents what is perhaps the pinnacle of Japanese role playing games. The fusion of story, characters, and sound leave one with a truly memorable experience. Knowing all of this, I refuse to let Chrono Trigger be that game that got away from me.