Last night my wife left me. Well she left me to go to a bachelorette party, I should say. Soon after my son went to bed, I loaded up Telltale Games The Walking Dead: Episode 1 on the PS3. Thinking my wife would be gone for a few hours, I thought that I could at least finish up Episode One – A New Day (I had played for at least an hour a week ago). Little did I know that I would spend the next three hours deeply engrossed in a zombie-filled horror.

I want to say something upfront about this series. Unlike most M-rated games, The Walking Dead earns its rating almost immediately. Beyond the bloody and sometimes lingering gore-filled camera shots, the explicit language used in the game is intense. I don’t think I’ve ever played a video game that uses the f-word with such frequency as The Walking Dead does. This is about as far from the Mario universe as you can possibly get. Just a word of warning.

Living in the chaos of a decimating virus outbreak is not dream of mine. Personal survival quickly becomes the rule of the day; personal survival at the cost of others lives. The Walking Dead: Episode 1 opens with a man named Lee being transported in the back of a police cruiser. Whether he is guilty of whatever it is he has done, the game leaves that up to your imagination. All you know is that something is going horribly wrong in the City of Atlanta. A zombie, standing in the middle of the highway, leads to the police cruiser crashing. The story of Lee’s survival has just begun. 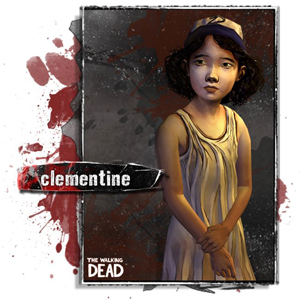 What makes The Walking Dead so compelling is its storyline. The game makes you actually care about different characters. Soon after the car accident, Lee meets up with a little girl named Clementine. This is where the game sucked me in. Lee suddenly has someone that is watching his every move, an innocent. Knowing Clementine is watching me, Lee, makes me make decisions differently. I want to shield her from the carnage. After playing Episode 2 – Starved For Help, I’ve learned that shielding her is often impossible. There is evil in this world, evil that knows no bounds.

I haven’t been this captivated by a game in a long time. The characters, voice acting, and storyline all come together to create a group of people I care about. Deaths come about as shocking. Choices I’ve made I’ve later regretted and have reaped the consequences of. The Walking Dead represents interactive drama at its best. I just wish they’d tone down the language.