Vay (link will open iTunes) is a roleplaying game (RPG) originally created by Working Designs for the Sega-CD. One of the first RPG’s on the iPhone/ iPod Touch, Vay provides a perfect dose of story and gameplay for those on the go.

The game opens with a wedding day destroyed, a royal family slaughtered, and  a princess taken hostage. In other words,  enough emotional material to put Batman’s quest for justice to shame. After witnessing the above events, Prince Heibelger sets forth to avenge his family and take back his princess.

With his father dead, Prince Heibelger stands to ascend the throne of Lorath. What are his political views? Will the prince continue the monarchy or abolish it in favor of a more democratic type of rule? Sadly, Vay never delves into such issues.

Most Japanese RPG’s are built around cultural polytheism. Vay, oddly, goes against this trend and references one God. One can only wonder if this was a translation issue (Japanese to English) or a decision made by the developer? 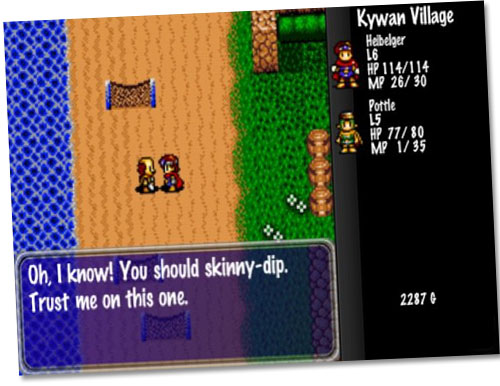 The lack of a traditional d-pad and the use of the touch screen for movement can make control a bit inaccurate at times. Otherwise, the battle system (the core of any RPG) is quick and engaging.

I have enjoyed the time I have spent with Vay. The linear story, catchy music, humor, and retro design combine to create an experience that is not to be missed. Priced at $4.99, the world of Vay awaits you at the Apple App Store.

Medium: Casual play. Does not require large chunks of time.