Once upon a time, I collected video game systems and games as a hobby. 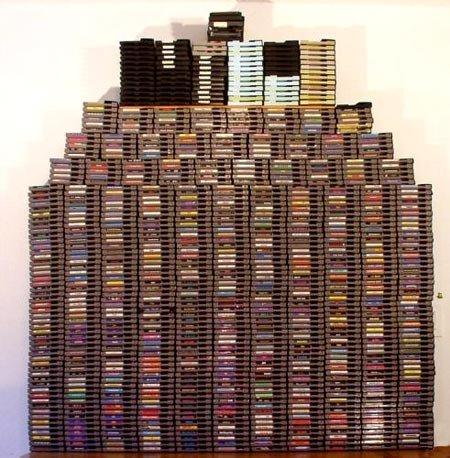 *Not my collection. Would have been cool though...

I slowly built up my collection over time. A SEGA Saturn here; a random game there. Often I would plug in a misc.  system and play some of the games I had for the fun of it. As time progressed, however, I found that my collection was gathering dust. Mt interests had changed. I mean, I still liked playing video games but didn’t feel the need to collect them anymore. So, I started to sell off the mounds of hardened plastic I had accumulated. I remember that  upsetting me at first. No longer would I be able to play Panzer Dragoon for the heck of it. The collection that had been everything to me was being dwindled away into nothing.

We all find our identity, who we are, in the things that we believe and do. For a long time, my identity had been as a video game collector. With the selling of my collection, that was a title I would no longer bear. Perhaps this was a good thing though. Collecting chunks of plastic, consoles and games, only to let them collect dust and ultimately not be played makes no sense. It’s like me going into the public library, buying all the books up, only to never read them or let anyone else read them for that matter. “Captain it is simply not logical.”

Since the great video game purge, I have tried to limit my video game library. I have done this by becoming an avid user of Goozex, on online video game trading site. This has allowed me to obtain $60 games by getting rid of games that I no longer play. This has occasionally led me to slight dilemmas of which games to get rid of -the inner collector in me wanting to keep them all!- . As I stated above though, this makes no sense. Especially when I can take a game I no longer play and trade it in for something I actually  will.