Fourteen years ago, at a college preview day for Azusa Pacific University, I was handed a brochure with the image of a rubber band ball.

Below the rubber band ball the brochure read: “Prepare to be stretched“. I had no clue how much stretching was about to occur…

But I can feel God beginning to stretch me and my family again. Preparing us for a new adventure.

God has been reminding me that being obedient to Him can be uncomfortable and exciting at the same time. Can’t wait to share more when I am at a point to do so.

Thank you, as always, for reading my blog and joining me and my family on this journey through life. Until next time.

A long time ago, I almost went to Azusa Pacific University. Finances fell through, reality set in, and I ended with a time where I felt lost. I had just walked away from my first job that I worked at for five years. Life felt unstable. I remember a marketing photo from Azusa that featured a ball of rubberbands. The tagline below the ball was, “Prepare to be stretched.” 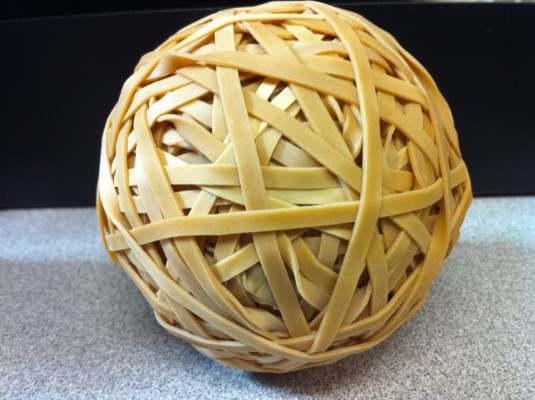 Growth is oftentimes not comfortable. Growth can be painful.

Some eleven years later, I feel lost once again. Caught in some sort of cyclical orbit that I cannot break free from. Since college graduation, Fall 2006, I have been trying to get my bearings. Part of that could be cultural, I live in Texas now versus my native California. Things are different here. The other part of that was thinking that God had called me to be a pastor. I had thought that I would go to seminary after college. First seminary I applied at told me I had too much student debt. The second seminary, which accepted me debt and all, was not to be. As I got ready to select my first classes, we ended up pregnant with my son. Any money for schooling vanished.

Where does one go with the path changes? How does one adapt?

I work as an Office Manager by day. Not the first job I would choose for myself, but I do enjoy the work when we are busy. In my eighth year now, I have no room for growth. I feel trapped.

I find myself wondering what that next step is. Where is God calling me to be? I find myself questioning my faith. I know all the right Christian answers, there is just a head-to-heart disconnect.

God constantly reminds me that He is working though. As waves threaten to sink me, He taps me on the shoulder and says, “hey man, I’ve got this.” I just need to believe it.

The Washington Post recently published an article that discussed how not all college majors are created equal. I couldn’t agree more.

I started attending a local junior college during my senior year of high school. Call it one of the perks of being homeschooled. I remember:

When I finally graduated from high school, at some point, I was told that I could continue to live at my parents house if I continued going to work and go to school. This sounded good to me, so I continually signed up for general education classes. Slowly I worked towards a specific associates degree that I can’t even remember today. This cycle of junior college continued for years.

During my junior college days, one of my best friends went off to college. I remember feeling an extreme amount of jealousy. He wouldn’t call or talk to me during the school year and yet would expect our friendship to be exactly where he’d left it when he came back for breaks. At the same time he seemed different, my friend was changing. Growing up, one could say. I knew then that I didn’t want to be a part of the hometown scene that seemingly never changes. I wanted to get out, to leave everything I had ever known and begin an epic adventure. If college was my ticket out, I was going to embrace it with my all. There was a problem though, I had no clue how to finance it.

Fast forward a few years, I remember a night sitting around the kitchen table with my parents. I had just applied and had been accepted to Azusa Pacific University. A private Christian school that was going to cost me $40,000.00 a year. Magical money that neither I nor my parents had. I was depressed. Earlier that day, my Mom and I had drove up to the school and had moved some stuff into my new apartment near the school. After talking to my parents that night, I knew that I couldn’t afford my ticket to freedom. I was stuck with no new adventure in sight.

Six months to a year later, through the grace of God, I found myself driving east towards Texas. Through random circumstances, I had read about a private Christian school in East Texas and decided to apply. I was quickly accepted. I was finally moving forward with life.

Back to The Washington Post article. It did not dawn on me, until after graduation, that not all degrees are created equal. I quickly realized that I had failed to do my homework on what was to happen after college. I didn’t know what I was going to do or how to pay for the loans that were pending repayment.

It would be easy to blame LeTourneau University now, for their lack of honest financial counseling and apparent glee in accepting my “money”.  I feel that while the school gave me a fantastic education, they never helped me step back and look at the bigger picture. How were all the student loans I had taken out going to impact me? Was there even a career path for someone with my degree? The importance of internships was never communicated, and I wish it had been.

College, ultimately, was a path and a decision that I made. Even with staggering loans, I did grow up, escape my hometown, create lasting friendships, and even find the love of my life. All of those things are priceless. I understand now that I was naive in just wanting a degree, a piece of paper to hang on the wall. I realize now that while not all degrees are equal, what you end up doing with the degree as your foundation is what matters.