(Bryan Note: This essay was originally published over at TheologyGaming.)

I left Christ in the Roman Coliseum; I left him to die. 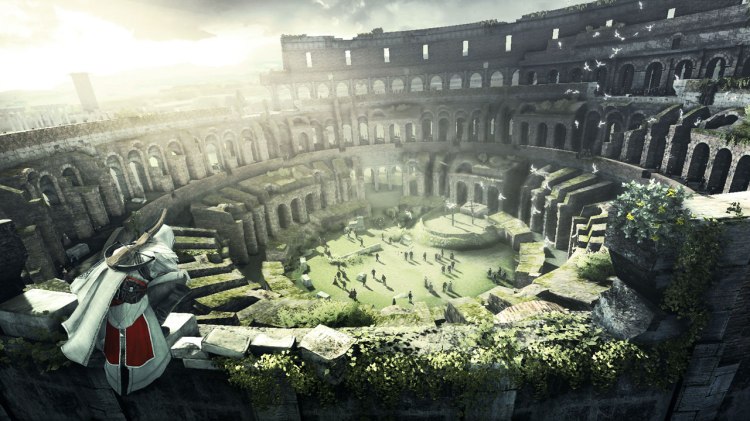 Carefully scaling the Coliseum walls, I slowly made my way towards my first target: three would-be snipers. Quietly, in succession, I stealthily stabbed each in the back. Not one of the snipers knew of my existence. I am the wind, the shadows, the reaper of death. I am justice incarnate.

My second target: saving the actor playing Jesus Christ in a play. The irony of a Passion Play in the Roman Coliseum does not escape me. Who knows how many Christians fought for their very lives within these walls? Some believers even torn to shreds by lions for the amusement of Nero and the people. I shudder in disgust and then slip on the disguise of a Roman soldier. Christ awaits my saving grace.

Events quickly unfold in a way I could not foretell. The actor playing Christ has been drugged! I effortlessly scoop him up as Borgia men flood in from all sides of the Coliseum. My mission: get Christ to a doctor. Holding him, I can clearly see his crown of thorns and the fake blood smeared on him. I know his only hope is a cure beyond the battle ensuing around me. Suddenly, the world grinds to a stop.

If you haven’t guessed, my PS3 locked up as I was escorting the drugged actor to a doctor. I was frustrated. A day has since gone by and I have yet to try again. My wife reminds me that it took Christ three days to resurrect, so why not give the game a rest? My conscience is restless. Nine hours of Assassin’s Creed: Brotherhood has left me with questions. I find myself questioning the digital bodies I have left de-rezzed; I find myself questioning what I am learning about life, beyond the fact that assassinations from the air look awesome. Perspective is everything.

I know that at the end of the day I will return and continue my “historical” Roman adventure. But I want to keep in mind that violence is reality based. Violence is also something that is worshiped within American cinema and culture. I believe that the reason on-screen violence resonates with people so much is due to the fact that it is usually carried out in the pursuit of justice. The Bible says this though:

Yet the Lord longs to be gracious to you;
therefore he will rise up to show you compassion.
For the Lord is a God of justice.
Blessed are all who wait for him! – Isaiah 30:18 (NLT)

I realize that Ezio’s actions in Brotherhood are simply a part of a fantasy world. I also realize that God is an avenger and a dealer of justice. Though I know that the worlds of fantasy and reality can sometimes blend, I want to be mindful of who and what I am allowing to shape my soul. So God help me.

One thought on “Christ, the Coliseum, and Violence”