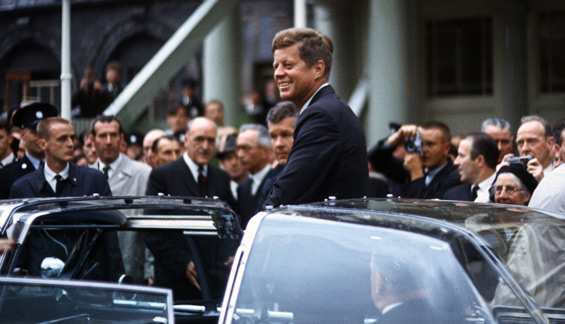 Over lunch, I happened to watch a PBS documentary on President Kennedy’s visit to Ireland, in 1963. Crowds gathered everywhere to see the President who had led America through the Cuban Missile Crisis some 9 months earlier. Beyond the crowds, the very faces of the people themselves are what captivated me. One would think that President Kennedy’s visit was the second coming of Christ. Joy-filled faces, reaching out to touch or to simply catch a glimpse of the American President filled the screen. For some reason, this awestruck scene reminded me of wave that swept now President Obama into the White House.

I think that we, as Americans, get excited about ideas. Be it flying among the clouds or carrying a Swiss Army Knife-like cell phone, we are always pushing the boundaries forward, testing what is and is not possible. I think that that is what carried President Obama into office. The very idea that an African American could become President of the United States was too big of a thought to pass up. So a majority of Americans voted him into office.

After nearly 4 years of leading the United States, President Obama’s time is running out. Though he is running for a second term, he now has a track record to back up his lofty speeches. The word “hope” no longer has the optimistic tone it once did. We have seen Obama polarize our country in ways he swore would never happen; we have seen how his words lead to little action.

President Obama is certainly no John F. Kennedy. However, JFK was not all he was cracked up to be either. I can’t wait to see what the November elections bring.