Yesterday, as I was driving to the Post Office, I noticed a woman crossing the street holding a brown box. The box could have held items that needed to be shipped; the box could also have held all of her possessions from work. This woman could have just been fired.

This morning, as I was driving to work, I saw an older man crossing the street with a cane and a bottle of oxygen. A tube ran from the bottle into the man’s jacket. I’m guessing he needed the oxygen to breathe. Who was this man? Where had his shoes recently taken him?

We never fully know the experiences and events that have shaped those around us. The older man I witnessed this morning could have easily been a World War II veteran. He could have  stormed the beaches of Normandy, watching those around him fall to the ground lifeless. He could have returned from the war, married, and raised a family that has since deserted him.  The thing is, I have no clue who that man was nor will I ever. 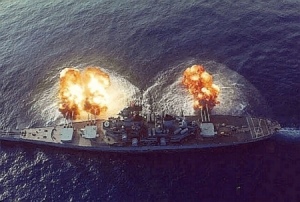 My Grandpa Hall rarely talked about his time in the Navy. What I do know is that he was a radar man aboard the Battleship New Jersey, in the Korean Conflict. I remember him talking about being stationed high up in the ship. He also talked about how much the ship would move when firing a broadside. That was pretty much all he said about his time serving.

When my Grandpa Hall died a year ago, there were pictures at his funeral. One of the pictures showed him laying on a bunk in his ship (looked crowded). He told my Grandma, in a letter, that he had a picture of her and my Dad that he looked at every night. The picture of him on his bunk showed him reading his Bible.

Though I don’t know much about my Grandpa Hall’s time in the war, I do know that he got up early every morning to read his Bible. Even as dementia set in, later in his life, he would still get up and read his Bible the best he could. He had made a habit stick so much that even in his memory loss, reading the Bible daily was ingrained in him.